This is a weird story . A man hires a canal boat out for a 2 week holiday then does the slowest runner in history – at 4 miles per hour. The police were duly called – and put out a nationwide ‘APB’ on the felon and his hot set of sedentary boatyness….

The last time anyone saw this guy was in March – since then it is known that he has repainted the boat from its original livery of green and red to a rather indiscreet bright blue.

Bad move. Even allowing for the incompetence of ‘Plod of the Yard’, if he really wanted to hide away forever, I suggest a big tin of camouflage paint would be more effective – as can be seen in this photograph. 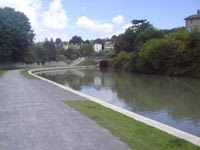 Fleet of boats on the Kennet and Avon canal cunningly concealed with silk finish camouflage paint....
Posted by Alfie at 12:15 pm

I wonder where I could get some of that paint for the ageing Camero which is still languishing in our garden?