The Antiques Roadshow comes to town…

In mid October, the Antiques Roadshow rolled into a seaside town just 8 or so miles from Alfie Towers. It was a perfect opportunity to get the family jewels valued (so to speak) - then I could have a few angst ridden weeks wondering whether to flog them to the Getty Museum in California for a zillion quid or donate them to a grateful nation…..

This being the UK – and hence unable to organise anything apart from endless heats of the World Queuing Championships, I had to try and think of a way to get my stuff swooned over and valued by a grateful antiques expert and back home in double quick time. Being a person who hates queuing with a passion – let alone with my priceless heirloom, there must be a way to avoid the endless coils of humanity that were sure to be there?

A call to Roadshow HQ in Bristol and a visit from an antiques bod confirmed that my 3 foot high piece of solid Wedgewood was indeed worth taking…. “It’s a pedestal” he said. Unusual colour – have you got the pot that should go on the top?”

“Pity. If it had the pot with it – we’d be talking a lot of money …. And that really is an unusual colour all right”….

I’d always thought of it as mustard coloured, but maybe ‘dusky diarrhoea with a hint of Rangoon rim’ would be more accurate.

Just before the antiquarian left, he gave me a ticket – “This will get you straight through to the reception past all the suckers who will be queuing for England. From there you’ll wait around 20 minutes before seeing an expert – get there around half ten and you should be able to just stroll in”.

The day duly arrived and we loaded the Wedgewood pedestal, a nice Victorian music cabinet and the magical yellow ticket into the car and set off. We arrived, found space and prepared for the short walk to Antiquarian nirvana. Mrs A got hold of the music cabinet, I grappled with the pedestal. After about 50 yards, my kidneys felt they were going to burst. The lump of Victorian pottery began to metamorphose into the consistency of lead weight. Sweat is pouring off me.

Up there, along the prom on a very windy Autumnal day, kidneys bursting with my big mustard piece between my legs I must have looked a right berk. Nearing the entrance, two women have just walked out of the theatre doubling up as Antiques Roadshow HQ. As they pass me, their eyes are transfixed on the big mustard column between my legs…. “What an unusual colour…. A bit like baby diarrhoea”….

“It’s mustard. The bloody colour is bloody mustard, OK?”.
“Sorreee! But where’s the pot, if you had the pot it would be worth a lot of money you know”….

I don’t reposte, I’m right out of any reposting. All the breath has been sucked out of me as I waddle through the entrance, straight into Mr Jimmy Jobsworth.

“Straight down and into the theatre and join the queue” he said.

“But we’ve got a ticket – it’s a special, non queuing ticket”

Somehow, I just do not think Mr Jobby was in. The lights were on but what with Eric Knowles, Michael Aspel and Henry Sandon being in town, the elixir of celebrity was surging through his jumped up little body. Nothing this exciting had happened to him since The Krankies had headlined – and he’d been appointed Head of Security for Jimmy Krankie’s school cap. He was on auto-pilot, gears set onto a pompous twat setting…..

“Yes, yes, yes….. down the stairs, through the lobby, on into the theatre and ask someone there. He’ll give you a ticket”…
With that, his finger jabbed down to a sea of humanity in the lobby, all holding their little jewels of antique flotsam, jetsam and crapsam.

We struggle down the stairs and fight our way into the lobby. It’s wall to wall people all standing around. Suddenly, rather alarmingly I realise that these people are in a snaking queue. I’m looking at the longest brick-a-brac conga line in history.

Right in the far corner, we see the entrance to the theatre. A spotty youth with the tickets is there just inside the gloomy entrance. He’s giving out little raffle tickets on a big role. He gives us 6003 and 6004. My heart sank…. “Just sit there at the back, when your number is called you can join the end of the standing queue in the lobby….. Unfortunately, the wait is around 4 hours before you get called”…..

The theatre is swathed in a penumbra of gloom – just like it is before an act is about to come on. I can just make out men in macs, sitting with their original Van Gogh’s and women nursing heirlooms passed down from great aunties and careful grannies……

“But we’ve got a special ticket” I pleaded.
In the dim antique grimness of the theatre his eyes locked onto the golden ticket. Golden rays of celeb dust bathed his acne-furrowed face as the magic ticket was waved in front of his eyes.

Suddenly, I knew what it must be like to be a somebody. Suddenly we were whisked away by the spotty kid towards the lobby….

We breezed past the conga queue and into the large side room to a reception desk. This room was where ‘the action’ was. He planted us right at the head of the conga queue…. A few weary queuers started to shout about the unfairness of it all. The very posh lady behind the desk held up our golden ticket and roared to the varicose veined huddled masses in a perfect received English tone “Excuse me, these people have a golden ticket!”

They cowed back in shame.

So this is what Margaret Thatcher is doing in her spare time then? Maggie gave us a big ticket each. Mine said ‘POTTERY’, Alfreda’s ‘FURNITURE’….. We joined our respective mini queues of around half a dozen people each.

I looked round, mini-queues everywhere. Cameras, lights and antique type people all milling around. In the middle of the room was where they did the filming. If someone had a nice piece then they would have to do the talk again in front of camera. Some bloke had brought in a really superb collection of Japanese animal bronzes. Oriental expert David Batty was drooling over them. Then there was the woman with the fantastic 16th century wooden chest….. Away from the filming area, little tables with experts sat back, unwrapped parcels and either made someone’s day or left them devastated. Some woman approached the bloke who was an expert on silver. I recognised him immediately, just then an old crone staggered up to him with three bags of newspaper parcels. She carefully unwrapped her bounty to reveal a shed load of nicked hotel coffee and tea sets. He valued the hoard at about 100 hours community service if the police ever caught up with her.

Finally, it’s my turn – and I’m sat down actually looking at the great ceramics experts, Henry Sandon and his son, John. They inspect the Wedgewood.

“Interesting colour” said Henry. “Rather like…..”
John interjects, “Mmmmmm. Have you got the pot?”

Crestfallen, I thanked Henry and John and met up with Alfreda outside. She seemed happy, her tiny little music cabinet was worth at least £800. We struggled back to the car with the stuff. I packed away the useless lump of Wedgewood onto the back seat …… come to think of it, the colour wasn’t mustard at all….. but one thing’s for certain, it wasn’t the colour of money either.

If you get a chance, watch the Antiques Roadshow episode from Southport when it is on. You might see a man in the background with a very red face, burst kidneys, a big yellow ticket in his top pocket - and carrying the biggest lump of solid baby diarrhoea in the world. 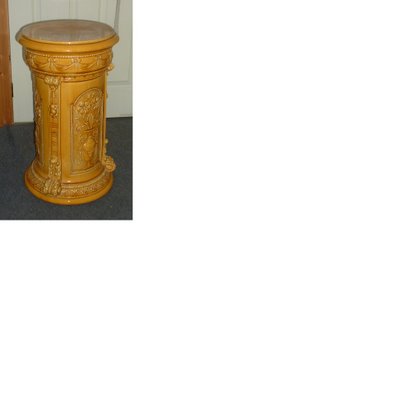