I see a vet has had his arm ripped off by a crocodile at a zoo in Taiwan. Apparently, the croc has been a bit poorly, feeling a bit ill and a bit off his food – so the vet was called to see exactly why he hadn’t eaten anything for weeks – with predictable results….

I don’t know whether there is any truth to the rumour that the vet, now happily reunited with his croc-crocked arm has refused point blank to go and visit the 8 foot tall silverback mountain gorilla who has been totally off sex for several years…..
Posted by Alfie at 3:51 pm No comments: 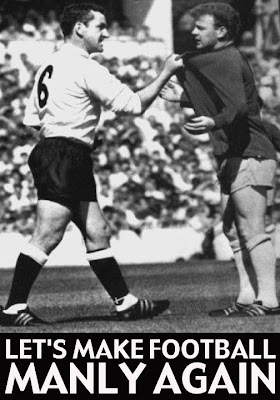 Divas, Divers and Drogbas need not apply…
Amazing isn’t it? Today’s footballers seem to have the balancing properties of a lump of lard on a tightrope. The merest brush by an opposition shirt can cause the victim to drop like a stone as if shot by Dirty Harry and his Magnum 45.

They twist, they triple salko with pike, they writhe in agony, victims of a gentle graze from a harsh bit of man-made fibre, that could, if you’re not careful take someone’s eye out.

So, what is the problem? Why can’t the average 100 grand a week footy player stay on his finely honed pins for more than 2 minutes without eating grass? Have they all been infected by a vindictive wobbly-bob gene? Has someone, somehow nobbled them via a drop of horse nobbling draft in the half time cup o’ tea?

Or are they just cheating?

Alfie the Corinthian, brought up in the age of fair play, Alf Tupper, Steve Zodiac and Melchester Rovers noble captain, Roy Race simply refuses to believe today’s professionals would stoop so low (without falling over in agony, obviously). And after much research I reckon I have solved the problem as to why they keep dropping like flies.

Sure, the modern day footy player has wads of cash falling out of every pocket – but does he still smoke 20 fags, drink 8 pints of brown over bitter and finish off with a fish supper every day? The answer is ‘no’.

Tuna bake with pasta will not give the average superstar the same profile as a diet of steak pudding and chips would. The mullet headed footy players from yesteryear – for example, Tommie ‘crunch’ Smith, Norman ‘bite yer legs’ Hunter and Ron ‘chopper’ Harris all had 3 things in common. Sure they had the dangerously psychotic nature, but more importantly they all possessed, a big fat arse and a burgeoning beer gut. Thus, when they ran, their suet pudding counter balances kept their ample frames in bulky equilibrium – and upright, even when they’d just had their heads taken off by a flying two footed challenge.

In short, footy players of yesteryear were just more ‘manly’ Not for them playing week in and week out of a green sward so smooth you could play snooker on it. For Tommy, Norm and Ron regularly played on ploughed fields - which had more in common with the Somme and Paschendale than a footy pitch. They played with footballs made from purest granite, wore boots fashioned from lead clogs – and were paid around 10 quid a week plus all the pies they could eat …. Now that’s what I call a proper man.

Didier Drogba and co simply couldn’t cope in that environment – in short, they just don’t have that manly profile. No pies and no Guinness equals no balance. And to be honest, I think I would trust a pork pie man more than a green salad with a side dish of grass man. With that in mind, Alfie is launching his brand spanking new campaign to make football more manly. Bring back beer guts and big bums – bring back balance, spend less on washing powder….