The Goodie, the baldy and the babe.. 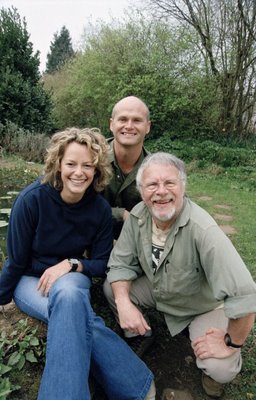 This week sees the start of the Autumn Watch series on BBC1. There is much excitement in our neck of the woods as the show is based at Martin Mere, which is about 2 miles down the road from where I live. With luck, we might get a glimpse of Kate Humble - but we have a superb pie shop in the village -so I guess we're more likely to see Bill Oddie with his chops wrapped around a dribbling meat 'n' tater pie.

I worked at Martin Mere soon after it opened in the '70's. There was a real frontier spirit around then, it was mostly mud, mud - and more mud. The reason it was created in the first place was to protect the wintering marsh land areas of the Pink-footed Goose. This visitor from Greenland & Iceland arrives in West Lancashire - and Martin Mere in particular in great numbers during the winter. It's sobering to think that most of the world's population of these lovely looking birds migrate to the area. Andy, my old friend from the time I worked there has risen through the ranks to become acting Curator of the place, so no doubt he's already met Kate (jammy sod).

Over the past two weeks, I1ve been keeping a close eye on the build up to the show. A little corral has been created in the corner of the car park as every day, more and more 'stuff' arrives - it's wall to wall satellite dishes, motor homes, catering trucks, Landrover hardware and around 15 million makeup artists.

Just how many people does it take to make a wildlife programme?

I hope they never have to change a light bulb.
Posted by Alfie at 12:10 am 5 comments: