Meeting a couple of old friends at Malham Cove… 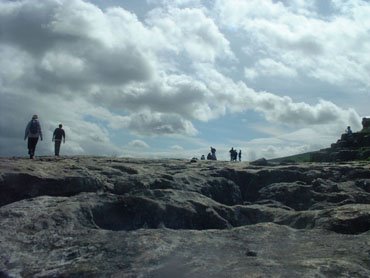 I met a blast from my schoolboy past last weekend. I literally stumbled upon ‘Clint’ and ‘Gryke’. Not a Yorkshire comedy duo, nor a north country concoction of sheep offal, but something last seen by me in Mr Fraser’s geoggers lesson, circa 1967.

For those who don’t know, Clints and Grykes are the descriptive components of upland limestone pavementing – and some of the very best bits in all of England can be found atop the sheer limestone escarpment that is Malham Cove, North Yorkshire. It’s a fantastic place to go for a walk – and Sunday’s yomp was specifically formulated as part of the ‘Get Alfie Fighting Fit Again’, or GAFFA for short.

After my scare at the doctor’s a few weeks back, I have become a newish man. Drinking alcohol at home is now banned – Adam’s ale is the only exception. I still have a scoop or two when I’m on quiz team duty – and of course, ‘Gin Night’ every Friday is absolutely sacrosanct obviously. But believe it or not, I’ve saved a shed load of cash implementing the GAFFA plan. I used to drink around 3 cans a night at home – that’s at least 20 cans a week, sitting on my arse watching the telly or tapping away on the keyboard.

I hate to think of my weekly unit intake – but counting my ‘quiz beer’ and my ‘gin nippies’ and adding it to my home beer stock, it must have been around 60 per week….. or nearly 3 times the recommended weekly intake for an adult male.

After a hurried, post-doc’ serious chat with myself, I resolved to change my ways. My alcoholic intake is now no higher than 15 units per week – and I feel loads better. The ‘gutometer’ (my jeans belt) has reduced by a full 2 whole holes worth, in only 3 whole weeks – so things are going in the right direction.

I have never had a problem with self-reassessment. I used to smoke like a chimney, between 60 to 80 a day – and gave it up forever on the 1st January, 1983. My first Son was nearly a year old at the time – and I reasoned that if I carried on puffing away, I wouldn’t see his 10th birthday.

Anyway, back to Malham. As well as drastically cutting down on alcohol, I thought I should take more exercise. Walking in beautiful and remote places in England seemed like a good idea. Number 1 was Malham Cove, North Yorkshire. Unfortunately, it’s getting harder to find both beautiful and remote places in England nowadays. As we breasted the little hill that guards the entrance to the Malham valley – my heart sank. Millions of people sporting brightly coloured kagools, billions of tents…. And one enormous, hastily convened car park – hours ago it was a sheep field, now it was hedge to hedge metal. The beaming smile of the farmer at the gate beckoned us toward him – and charged us 3 quid to get in. I reckoned a hernia was being groomed under his tweedy waistcoat, courtesy of the gargantuan weight of pound coin in his ticket bag.

Once we’d parked up, had our butties and started off towards Gordale Scar, things got better, kagool sighting got rarer. The scenery was breathtaking, gorge, waterfall, sparkling river until at last we arrived at Gordale. What a place. Just fantastic. A gothic masterpiece in limestone, towering columns and buttresses, rising sheer and going up hundreds of feet - almost closing above our heads has been carved by nothing but wind, ice and water. After Gordale, we wheeled away up the adjacent hill towards Malham. This part of the walk was really knackering. The hill just went on and on upwards towards the top of the cove. And then we got there. The top of Malham Cove proper – and it’s wonderful Clint and Gryke architecture.

The view was stunning, awesome - and then some. And then some more. We could see for miles. Fortunately, in the near distance we could just make out a hostelry, no doubt selling fine English ales. That settled it, we descended the long and winding steps at the double – and then at the treble. We reached the foot of the giant cliff that was Malham. At the bottom of the sheer limestone wall bubbled the source of the River Aire – as clean as, err, a mountain stream. We reached The Buck and downed a superb pint of Timothy Taylor. It had been a really great day, a day that makes you thank your lucky stars you live in England – even though Blair and his control freaks are doing their utmost to wreck the place. 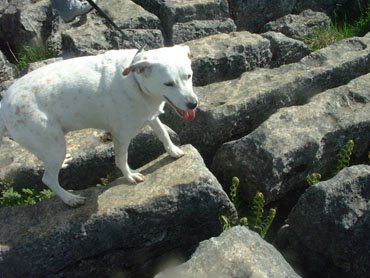 Domino the dog, Clint and Gryke.
Posted by Alfie at 6:18 pm 8 comments: